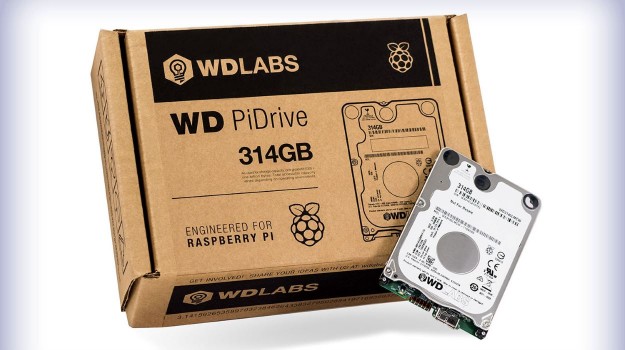 Last year, Western Digital introduced a 1TB USB-native hard drive designed for use with the Raspberry Pi. This year, for Pi Day, they unveiled a new, cheaper model.

To get the price down, they reduced the capacity of the new PiDrive. This model packs comes in 314 GB capacity and is retailing for $31.42 or ~Rs. 2,100 in honor of Pi Day. The PiDrive is a 7mm, 2.5-inch hard drive that ships with an integrated USB 3.0 port instead of the SATA connectors you’d normally see on a drive like this. Western Digital also tweaks the drive’s power-saving features to keep them from being a drain on your Pi-based builds.

It’s basically the same drive as the 1TB model that went on sale in September. One important difference is that this one is just a bare drive. If you need cables, an AC adapter to power your Pi-based creation, or an enclosure, those are all extra costs. To be honest, the PiDrive is a luxury: it’s more capacious than equivalently priced SD cards and rather faster, but you can have three times as much storage for not much more money using the exactly the same software that’s pitched for the PiDrive.

On performance front, when tested with 1GB sample file being copied three times and duplicated the resulting 4GB directory. The duplication took 264s on the PiDrive — a speed of 15.2MB/second. The same test run on the SanDisk 16GB Ultra took 783s — 5.2MB per second. So the PiDrive is roughly three times as quick as an SD UHS Class 1 card.